Todd grew up in Papillion, Nebraska, and graduated from University of Nebraska-Lincoln in 1981 with a degree in journalism. Two years later he started a magazine called Omaha Today, which helped to springboard a 30+ year career in magazine publishing. The positives include the philanthropic and cultural events around town as well as the abundance of business opportunities. Todd credits his staff with creating an award-winning magazine that has been recognized with regional Great Plains Journalism Awards, state AIGA (American Institute of Graphic Arts) awards, and local Omaha Press Club awards. Greg was an entrepreneur with a bottle recycling business before joining Omaha Magazine back in 1988. He and wife Terese went on to invest in the magazine, becoming partners with publisher Todd Lemke in 1990. Today, Bruns is Vice President of Omaha Magazine and works in advertising sales. An avid music lover, Bruns has played the role of drummer and/or lead singer in numerous Omaha bands over the past 35 years. He enjoys golfing, hiking, traveling, spending time with family and friends, and hanging out “in our little house on the prairie” cabin in Estes Park, Colorado, with “my awesome wife of 30+ years.” Bill was born in Utah and currently resides in the hip Benson neighborhood with wife Kim, son Ty, and daughter Parker. He has shot for every magazine since 2002 and originally worked alongside partner Scott Drickey, who helped him found minorwhite studios in 2008. In 2012, Bill joined Omaha Magazine's staff as Director of Photography and was promoted to Creative Director in 2015 and associate publisher in 2018. He enjoys early mornings, space and conversations. His work has helped him travel the world and meet amazing individuals. His client list includes Rolling Stone, Sony, Borsheims, and Money Magazine. 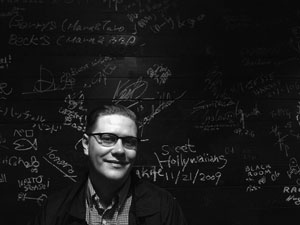 Fredrick is an award-winning lifestyle writer and nature enthusiast. He currently writes for the trip planning platform Jubel (@jubel.co) and for his personal travel blog, takegoodrisks.com. His wanderlust is global, having toured cities such as Tokyo, Santiago de Chile, Marrakesh, London, and Cardiff with his "dynamite" girlfriend and photographer, Sarah Lemke. While he enjoys urban settings, his favorite place is anywhere that offers obscure, beautiful landscapes and a toasty campfire. When not clacking away at the keyboard or retying his hiking boots for the 20th time that day, Fredrick is likely to be found in some hole-in-the-wall with a slice of New York-style pizza and a pending jukebox request for David Bowie’s “Let’s Dance.” Linda Persigehl, Associate Editor
After six years away spent freelance writing, volunteering with her kids’ Bennington schools, and obsessively researching her family’s genealogy, former managing editor Linda Persigehl has returned to the Omaha Magazine fold. A lover of all things home decor, she gets her fix working a couple shifts a week at Pier 1 Imports (where she spends her entire paycheck). She and her husband of 27 years, Steve, are brand-new empty nesters who love to explore new cities (most recently, Philly!) and attend Creighton Bluejay hoops together. When she’s not pining away for her two “awesome” college kids, you’ll often find Linda walking her two adopted mutts, watching The Marvelous Mrs. Maisel or The Queen, or enjoying a martini at Charlie’s on the Lake with friends.
https://www.omahamagazine.com/search?utf8=%E2%9C%93&q=Linda+Persigehl Matt is the youngest of four boys, meaning there was always someone around with whom to play football and wrestle. This prepared him to play in many sports at Ralston High School. He earned a degree in Graphic Design, Computer Graphics, and Illustration from The Creative Center in 2005. Matt’s professional life has taken him from Hayneedle to DocuLynx to Fat Brain Toys. This DIY’er enjoys building and welding, and considers himself an amateur carpenter, shade-tree mechanic and blacksmith, all of which are useful skills as he and his wife, Chelsie, are currently using to fix up a home in Ralston. Matt retains his love of the outdoors—camping, hiking, and biking as often as possible. When they are done with all these projects, Matt likes to relax with a cigar and small-batch bourbon while hanging out with Chelsie, bull terrier Koa, and mini schnauzer Ozzy. Ludwick is a senior and a graphic design major at Concordia University of Nebraska. Ludwick is artistically inclined in many aspects. Her favorite form of art, to pass time, is needle felting, making amazing sculptures with only wool and a needle. In her free time she trains her dog, Ariel; reads comics; watches anime; and plays video games. In the future she hopes to work in animation. Dave joins the company after running his own graphic design company, Troubadour Design Studio, in Papillion for many years. Trouba was born and raised in Omaha, and graduated from the University of Nebraska-Lincoln, so he is, by birthright, a die-hard Nebraska Cornhusker fan. He enjoys cooking, playing cribbage, shooting photographs, and all things Czech and Irish. He is also a borderline golf addict, so readers will find him hitting the links whenever possible. Trouba and his wife, Susan, have three children—Dan, Ryan, and Lauren—and an outspoken corgi named Riley. Fisher’s career has taken him on a full-circle adventure. More than 30 years ago, his sports management career started with the Omaha Royals. His wife, Phyllis, is a former military brat, so it was relatively easy for her to travel with Kyle on eight different sports gigs in eight years, the eighth being the Omaha Stormchasers. Their son, Travis, grew up in the area and started college at Nebraska Wesleyan in fall 2020. Memorable moments at the ballpark include a stadium bomb threat, an exploding field sprinkler that provided the teams with a pregame shower before the first pitch, and a dinner with Hall of Fame player George Brett and Warren Buffett. 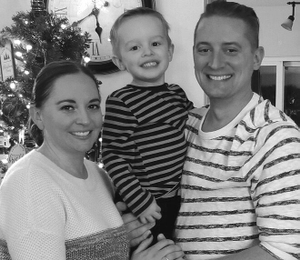 Originally from California, Ingersoll and his wife, Samantha, moved to Omaha in 2013 and have enjoyed living here ever since. Born March 24, 2017, their son is as rambunctious as ever. Damian taught preschool before he started working for Omaha Magazine and still enjoys helping out at the preschool from time to time.  He is an avid collector of musicians’ autographs and hopes to be able to attend more concerts this year. In his down time, Ingersoll enjoys watching movies, playing classic video games, and doing outdoor projects. Sandy joined the Omaha Magazine team in 2011. Recently, she added the title ‘Contributing Editor of OmahaHome magazine.’ Having worked in the home industry and marketing/advertising for the last 15 years, her new position seemed a natural fit. “I have a passion for OmahaHome, and have been told my whole life I missed my calling and should have been an interior designer,” Matson explains. “I love helping friends and family with their homes, and enjoy painting and unique home projects of all sorts.” The Iowa native has three children—Steph, Jake and Mady. She enjoys going to estate sales and antique stores, and sharing wine with good friends at favorite spots like Johnny’s Steakhouse, Brix, and the Old Market. “Most nights, though, you can find me at home watching a good movie under a comfy throw,” Matson confides. Gil is a New Jersey native, who moved to Omaha in 1984 when he worked as a hotel manager with Marriott. Since then, he’s held positions as director of a Missouri riverboat, marketing director for the Omaha Symphony, and his current position at Omaha Magazine. Outside of his sales responsibilities, he's always looking for new and exciting business ventures. Gil is Omaha Magazine’s “man about town,” and is often seen at Omaha events and hotspots, promoting Omaha fun. When not working, he can often be found at Havana Garage, Mahogany Steakhouse, Pitch, and Sullivan’s for live jazz on Thursdays. He also enjoys golf, his Vespa, and driving his 1979 MGB…when it’s running, of course. Alicia has worked at Omaha Magazine for 11 years as Gil Cohen’s assistant. She is currently the senior sales coordinator, helping Gil with customer service, ad work, and sales. Collaborating at edit meetings over ideas are her favorite Omaha Magazine days. She also enjoys collaborating on house projects with her husband, Trevor. Currently, she is the president-elect of the Duchesne Academy Alumnae Board and an active volunteer at Loveland Elementary. She enjoys researching her family tree, and has even received a certificate from Boston University in genealogical research. All of this happens while she is fielding an array of constant questions from her amazing son, Logan. George has called Omaha home since 1991. The Chicago native and his wife, Jill, will soon celebrate their 23rd wedding anniversary with their two sons, Justin and Brandon. George is no stranger to the Omaha sales community and has held sales and management positions with ITI Marketing Services, Ecolab, and, most recently, Valpak of Omaha.  He joined the Omaha Magazine family with a diverse selling background and a passion for building loyal customers. When George isn’t focused on creating great opportunities for his clients, you can find him with his family enjoying a wide range of activities and sporting events.  You might even find George hitting a few rounds at one of the many area golf courses.  In addition, George is a faithful Chicago Cubs fan…but we won’t hold that against him! 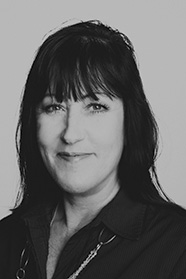 The origin of obsession is the subject of much discussion in psychological circles, but Dawn doesn’t care to give it a second thought when it comes to frogs. That’s right. The slimy kind. Warts and all. “What’s to explain,” the Omaha native chuckles, “I’m just crazy about frogs.” A fascination with the emerald-hued amphibians has led her to collect everything from frog-related ceramic figures to clothing—and everything in between.  Something of a tadpole here at Omaha Magazine, she joined us last June after a long career in a variety of advertising gigs. Her giving and nurturing nature also led her to dedicate four years of her life as a medical assistant working with Alzheimer patients. Dawn has been married to husband Steven for 14 years and is the proud mother of adult sons Joshua and Austin. She recently became a grandmother for the first time and is already spoiling grandson Gabriel with all manner of frog-themed toys, clothing, and baby gear. Tim McCormack is a highly energetic and passionate master marketer whose past business experiences include positions as a teacher, school principal, and an entrepreneur. Tim has built, owned, and operated 14 businesses in 4 states, hiring hundreds of employees, putting together marketing programs, and cultivating strong and loyal customer bases for each. At Omaha Publications, he provides customers with a wealth of experience, and works closely with clients on ideas for building core customer bases, strong marketing programs from expertly designed print ads to email marketing, social media, and web-wide smart display ad campaigns. Today's businesses are kaleidoscopes and they are ever changing. Gas Stations have become convenience stores, grocery stores have added banks, deli's and flower shops. Restaurants that had previously only served lunch and dinner are now serving breakfast and coffee drinks. Times have changed and Tim McCormack would like to work with you to keep you up-to-date and to provide real value to you in your marketing efforts.