By all appearances, 2000 was a standout year for Willie Miller. A senior at the University of Nebraska—Lincoln, Miller donned the scarlet and cream as the Cornhusker’s starting fullback, thundering down the field for a career-high 225 yards on the season. Sell-out crowds roared and reveled in the wake of his physicality; pumping legs, heaving shoulders, and cracking helmets rippled The Sea of Red.

On the surface, Miller appeared to absorb it all—the fanfare, the impacts, his studies—earning his second First-Academic All-Big 12 award and recognized as a Brook Berringer Citizen Team Member for his dedicated community service.

As his tenure as a collegiate athlete drew to a close, the horizon beyond Memorial Stadium’s uprights shone bright and clear. Yet, behind him, darkness lingered. Quietly, it settled at the base of his neck.

“When I was starting my junior year, when I started fullback and the season was going really well […] I was the fastest I’d ever been. When it came to hitting in any kind of way, when it came to running the ball, I was definitely at my peak,” Miller recalled, now sporting surgical scrubs over shoulder pads, some 20 years later. “And I can tell you, by the time I got the end of my senior year, I had games where I could no longer feel my arms, or lift them by the end of a game […] being a fullback, you’re a battering ram, face mask to face mask all game long. The crazy thing is, once that [final] game was over, I found out that it was all over, because I was told that I had played through three spinal concussions that year.”

Back then, with injuries, it was different, you really didn’t sit and wait and let it heal—you played through it,” he said.

“I’m all for safety, but back then, it wasn’t at the forefront of thinking. It was a war. It was a warrior mentality,” Crouch said. “It was, sacrifice your body, and your mind, and your spirit, and hopefully if you do that to a certain level, you’re going to have success in your team.”
A warrior’s contract is writ in simple, yet iron-clad terms, well summarized in the Southwest corner of Memorial Stadium: “Not the victory but the action; Not the goal but the game; In the deed the glory.”

As Huskers, Crouch and Miller were bound to this tradition, and fulfilled its agreement with sacrifice, both immediate and gradual. Miller, however, would pay dearly for it—and in the end, receive something of far greater value: redemption.

After graduation, Miller pursued a career in pharmaceutical sales. Cognizant of the effect his sheen as a local celebrity might have on prospective customers, he chose to start anew in Denver, Colorado.

“I’m all about competition. I didn’t want to remain in Nebraska, have people that are just willing to write a prescription because of my name, and that I played football. I wanted to be on the same ground as everyone else,” Miller said.

Despite early success in his field, it grew increasingly difficult for Miller to enjoy the fruits of his labor. Month after month, year after year, vertebrae by aching vertebrae, the pain in his neck crept ever downward. Miller sought respite in booze and prescription pain pills, a pairing notorious for slow-burn addiction. A disc replacement operation only quickened matters.
“Honestly, I can tell you, from the time I first took one of those pills, I liked the way it made me feel. It took away my pain, all of my pain, like the mental pain,” Miller confessed.

As the years toiled on, Miller’s first marriage buckled, and finally broke under what he described as “a combination of work, stress, drinking, and painkillers.” He remarried and fathered a child, his daughter Regina. The pressure manifested physically. The 250-pound star athlete had become engulfed by a man Miller hardly recognized; one who stared dejectedly back at him from the bathroom mirror. It was 2008, and Miller now weighed over 400 pounds—and life was about to get even heavier.

“That’s when I got in trouble,” Miller said. “I ended up having a road rage incident with a guy and he was in a regular car with his regular clothes. And, it was just a bad day. But every day was a bad day that time period.”

A collision occurred, a volley of words were exchanged. As it turned out, the man in the regular car, wearing regular clothes, was an off-duty Omaha police officer. The following year, a judge ruled Miller guilty of felony criminal mischief—the lowest degree of felony in the state, but damning nonetheless—and sentenced him to 18 months probation.

“Yeah, that was the moment where things really hit the fan,” Miller continued, his voice faltering between acceptance and self-reproach. “That was the first 10 years of that, and I hadn’t had enough punishment, at all. I had too much pride still. So, obviously, when you have that, you lose things; freedoms, everything else. And for me, it was: ‘Okay, my life’s over.’”

Miller’s existence unraveled. He lost his livelihood, his family, and even his home. For two years, he scraped by at the Salvation Army.

“In my mind, my life’s ruined, and this the where I’m going to spend the rest of it. I had times where I had been suicidal, I felt I was better than that, right?” Miller recalled. “Because there wasn’t anything positive going on. I felt like anyone I came across, I was just this cancer. I didn’t have anything positive to say to anyone, and by the time they were done with me, they’d just be zapped. So I went down to Mississippi in 2015, because I knew in order to stay alive, I needed to be with my mom. ”

A retired nurse, his mother’s support kept death at bay, and set the scene for a fateful encounter. A longtime fan reached out to Miller over Facebook, after which the two frequently commiserated over shared struggles with substance abuse. One such conversation proved pivotal: it introduced Miller to the organization that would change the course of his life.

“The Nebraska Greats Foundation is set up to help former athletes that attended any college in the state of Nebraska,” explained Crouch, a member of the foundation’s board. “Jerry Murtaugh is the one who started the organization, a former [Nebraska] football player. We help, both male and female athletes with their medical or emergency needs.”

With the support of Crouch, and administrator Margie Smith, whom Miller now describes as his “second mom,” a skeptical Miller worked with Nebraska Greats. To his astonishment, Miller received the back surgery he’d long considered foregone.

Miller’s condition vastly improved as a result. Familial wounds began to heal, and he met the woman that stands by him today—his wife, Karrie. Still, one surgery couldn’t possibly mend 20 years of self-destruction. Miller’s greatest adversary still lay ahead: himself.

“I’m still on all these medications, and all of a sudden my 80 milligrams worth of Oxycontin, combined with wearing a fentanyl patch, is gone,” Miller said. “It didn’t take me long to figure out it did a lot more than numb my pain.”

Those hollow spaces ate at Miller, and he grew desperate to satiate them. He turned to his other vice, and overcompensated to near-fatal effect. 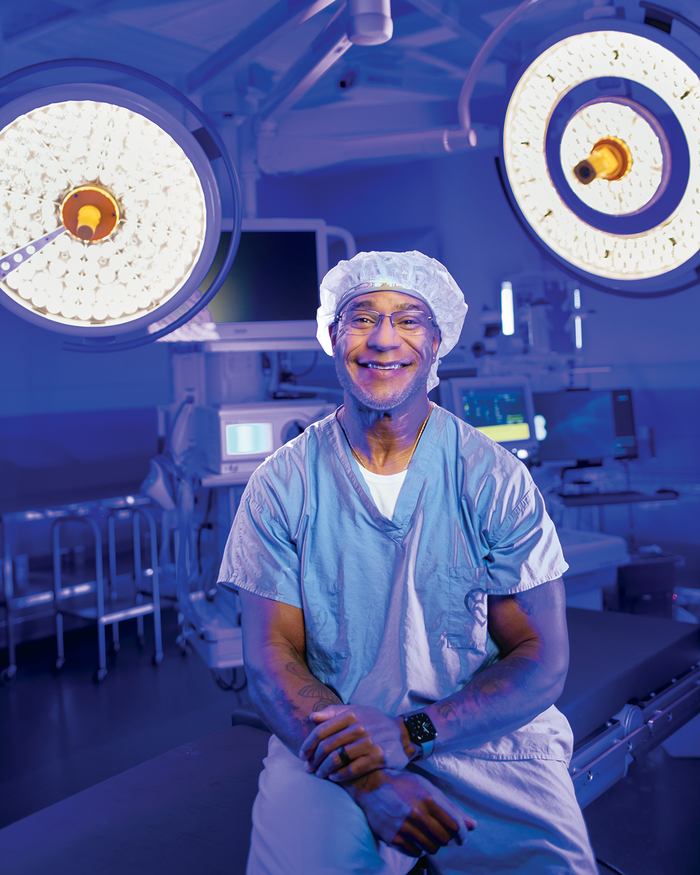 “October 20th, 2018. I literally drank myself into a coma,” Miller said. “That was when I had my bright light experience: I saw the brightest light I’d ever seen, this figure that you can’t define that lifted me up, holding me, so I felt held and loved. I saw myself at like, 5 years old, when I was most innocent, and it told me it that it’s seen some of the dumb decisions I’ve made, but it knows I’m doing it because I feel unloved. But it said to me, ‘This is your last chance—I’m letting you know right now you are loved. I love you.’”

“When I came out of it, they were yanking out the tubes from being intubated. They had me there for seven days, because they thought I was going to take my life,” he said.

The ethereal encounter ignited something in Miller—a burning desire to live, more than merely existing. Humbled, he made a series of calls.

When Devaney-era Husker and retired Seattle Seahawks guard Bob Newton lifted the receiver, he didn’t hesitate to act. After recovering from drug addiction in the 1980s with the support of coach Tom Osborne, Newton dedicated his life to battling substance abuse, working at Rancho Mirage, California’s Betty Ford Center for 15 years while performing outreach in Lincoln.

“When I first got the phone call from Willie, I could tell by the tone of his voice he was really hurting, and that he needed to get into a place as soon as possible to start getting help,” Newton said. “I had a friend who was also from Nebraska, named Pat Gleeson, up there at Recovery Ways, and I said ‘Look Pat, this guy is hurting financially, he needs help. He’s a Husker and we need to get him to some residential treatment,’ and Pat made that happen.

“I could tell he was really, really motivated to get help […] he knew he was at the end, pretty close. Nebraska Greats helped him with his other medical issues, so it was combination of all those things coming together at the same time, and him reaching out and being humble, and saying ‘I need help.’”

Miller had plenty of space to think during his recovery, and lighted upon an idea: for all the suffering he’d seen, caused, and endured, maybe, at last, it was time to heal.

“A high school classmate of mine, Margie Smith, reached out to me and said she wanted me to meet with me and Willie and talk about the possibility for him to come through our accelerated nursing program,” said Creighton University Dean of Nursing Catherine Todero. “So we met, and to be honest, I was a little skeptical that he’d be able to do it, because it’s a very rigorous, very intense 12-month program.”

Todero was thrilled to be proven wrong.

“I give the guy a lot of credit,” she said, “because there’s been a lot of things that’ve tried to derail this man, and he got to the end. I actually wrote his letter of reference to the state board. I told him you have to be 100% honest with them. It’s not about what you’ve done in the past, it’s what you’ve done to correct those past issues. He was able to write a pretty compelling letter about the intensity of the program, some of the legal issues he was dealing with, all of that stuff—and he never lost his sobriety ”

As for Miller, his time in the program was indeed arduous Yet, the warrior born of Memorial Stadium’s hallowed fields, the very same who stubbornly trudged toward annihilation, stared down a better future. Willie Miller, the healer, met his gaze.

“It was interesting, because I was so focused, I was laser-focused [...] everything was study, study, study, and I wasn’t doing anything else in life,” Miller recalled. “So I made a decision to include my wife, and then my daughter. I started to learn and understand that part of the saying amends process is not really saying that you’re sorry—it’s giving back what you took.”

“The thing I really love about my life today, I really try to help other people, and that’s what I try and do everyday,” Miller said. “And another I love about being a circulating RN, is that I’m part of a team again, right? You rely on one another, and the goal is to take care of that patient.

“It’s the coolest thing to be able to do everyday. I mean, it really is.”