Have Palate, Will Travel: Dave Utterback's Food Adventure with Friends Photography by Joshua and Sam Foo

When most people plan a vacation, they pack sunscreen, loungewear, a camera, and snacks. When Dave Utterback plans a trip, he packs his palate and passport. Utterback, owner and chef at Yoshitomo in the Benson neighborhood, doesn't take a vacation—he goes on a food adventure. Specifically, he travels to Japan, where he explores the country and its culinary scene, looking for authentic additions to his Omaha sushi eatery.

Utterback, named as a semifinalist for the prestigious 2020 James Beard Foundation Award as outstanding chef in the Midwest, has traveled to Japan several times over the past 12 years. Initially, he visited the country once a year, spending several weeks exploring and sampling its food, seeking to ensure he captured the right ingredients so he could create similar dishes when back in Omaha. Following the birth of his son, he realized he missed his family soon into his trips, so he changed his travel routine to two 10-day trips.

“On about the fifth or sixth day, I start missing my kids,” Utterback said.

While he has regular spots where he enjoys dining, Utterback visits different areas of Japan each trip, which introduce him to different chef styles and cuisines.

“It’s for work and research, so I want to sample different destinations,” he said. “I’m always looking for new items to try here.”

Not seeking to copy the dish ingredient by ingredient, Utterback uses his trips to influence the Omaha menu.

“I can know how something should taste instead of thinking or hoping it tastes like it should,” Utterback said.

His most recent trip took him on unique paths he hadn’t traveled before. He said he ate pigeon for the first time.

However, quite possibly the most memorable event of this trip occurred during a visit to the fish market with his friend Hiroyuki Sato, a celebrity chef in Japan. The fish market is usually closed to the public, so you need to be invited by a chef to attend. During the visit, Sato introduced Utterback to Yukitaka Yamaguchi, the “King of Tuna” in Japan. The tuna broker exclusively provides the best tuna to 200 of Japan’s top restaurants, Utterback said. Yamaguchi’s social status gives him an opportunity to sample about 20-30 bites of the world’s best tuna daily. If it passes his palate, the fish will be served at some of Japan’s finest eateries.

When asked if he wanted to sample a bite, Utterback had only one response.

He felt special, Utterback said, because people make reservations months in advance at Sato’s restaurant, which seats five or six people at a counter, for an opportunity to spend up to $400 for one bite of tuna similar to the ones they were sampling that day at the market.

“And I was the only person on the planet trying that bite of tuna,” he said.

Utterback’s Japan tour this round was extra special for him because he had traveling mates.

Kane Adkisson—who is preparing to open a brick and mortar restaurant in North Downtown and has cooked with Utterback at Yoshitomo—jumped at the chance to return to Japan, this time with Utterback and photographers Joshua and Sam Foo. The Foo brothers photographed and filmed the trip for projects they are working on with the chefs, walking the area in the early morning, before the day’s rush started, photographing anything that caught their eye. 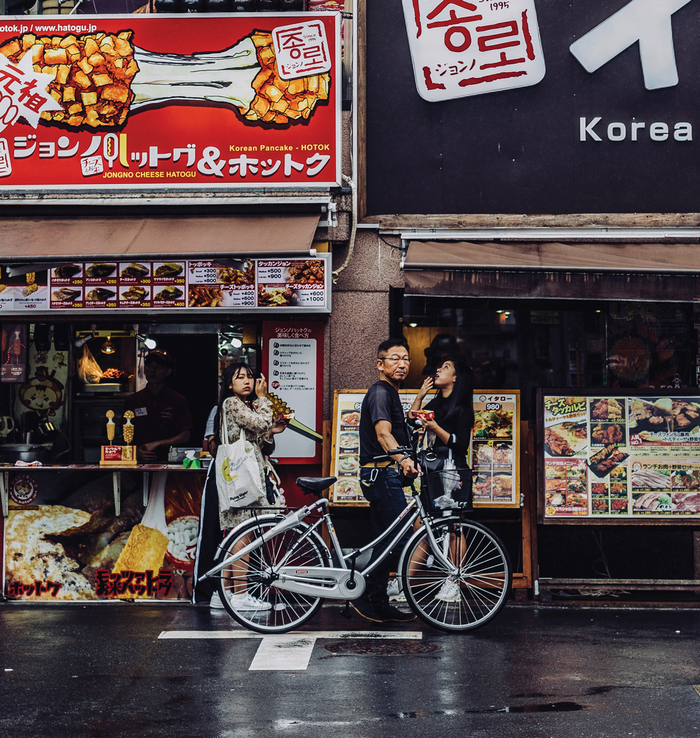 Adkisson spent three months in Japan in 2016, working as a line cook at a small, Michelin-starred Tokyo restaurant. He enjoyed the opportunity to share his memories of Tokyo with his friends. The quartet enjoyed dinner at Muroi, a family restaurant, where his friend Go-San Muroi, is chef. Muroi and his father go mushroom hunting on the mountainside of Mount Fuji, Adkisson said.

His second trip to Japan was considerably different than his 2016 experience.

“There’s a huge language barrier,” Adkisson said. “[And] it’s a huge cutthroat business there...To go back and hang out with these guys and to go back to his (Muroi) restaurant and see how he’s grown as a chef—he gets to run his own ship.”

Utterback appreciated the opportunity to travel with Adkisson.

“Kane’s prior experience brought a uniqueness to the trip. He’s got different spots than I would.”

One of his favorite dining experiences was at Sato’s restaurant, Adkisson said. Utterback’s friend created a 26-piece sushi dinner at his restaurant, Hakkoku.

The Foo brothers’ view of the cities they visited—Tokyo, Kyoto, and Osaka—was considerably different than the chefs’. They were observers, watching the two men interact with other chefs and taking in the food scene.

“It was cool to go over there with two chefs,” Joshua said.

One difference for Joshua was his menu in Japan. Eating a plant-based diet, he was challenged to find options that didn’t contain meat, he said. Finding vegetarian options often required stopping in small stores, where he could buy dinner kits that met his needs. However, he said one of the best meals he had on the trip was a delicious dish they had at Muroi, made with fresh mushrooms and rice.

Food truly drove their adventure. The quartet took a day trip to Osaka, where they stood in line to order okonomiyaki, a Japanese pancake, known for its savory taste.

As Utterback plans his next trip to Japan, his appreciation for the country extends beyond food. As a Japanese-American, if he wants a specific Asian dish, he either has to make it or seek it out. In Japan, it’s likely already on the menu. And, he said, it’s nice to be around people who look like him.

The online version of this story has been modified for corrections. 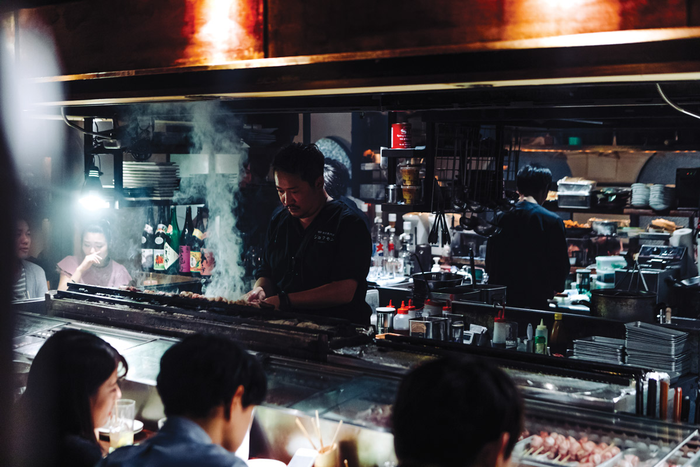 Travels in Japan [3 Images] Click Any Image To Expand