To Israel With Love: The Journey of a Lifetime Must be Taken Every Day It is a brave soul who feels a calling to travel, drops everything, and crosses the world for a journey of self-exploration. What makes Sandi Martin’s journey of discovery more unique is that it came long after she had built a life she loved, and felt no need to escape from.

“The trip was a surprise to many people,” Martin mused. “That a woman over 70 would take off on a solo trip across the world.”

Unlike many people who plan adventures during a time of transition or to escape a stagnated existence, Martin wasn’t lost, alone, or aimless. A noted writer, devoted mother, and faithful member of the Jewish community, she was living a fulfilling and happy life. She wasn’t trying to get away, she was diving deeper.

“I’d reached a point where I realized I still needed some answers,” Martin said. “What is my purpose? Am I a body with a soul, or a soul with a body? Why is there evil?”

As she searched her faith for answers to the eternal questions, Kabbalah, the ancient Jewish tradition of mystical interpretation of the Bible, became her Rosetta Stone. Martin became interested in Kabbalah after taking classes led by Rabbi M. Mendel Katzman of the ultra-orthodox organization ONE Chabad.

While many are familiar with Kabbalah through its commoditization by celebrities such as Madonna, true practice isn’t through a book or a bracelet. It may seem to be a Hollywood dream, but to the faithful practitioners here in Omaha, it embraces the soul of Judaism.

“It’s not as visible here as it is in Israel, of course,” Martin said. “In big ways and small, there are people practicing all over Omaha. Kabbalah is the way you live. It is both the showing of and feeling of true gratitude. After spending more time with people who knew more than I did, believed and worshiped and practiced differently, I really felt the call to make my first trip.”

Having explored Europe with friends previously, Martin knew this call was more than a case of wanderlust. In October 2018, she took her first trip to Israel through Amiel Tours. The tour stopped in Tsfat, Jerusalem, Tel Aviv, Haifa, and Golan Heights. A valuable spiritual resource during this time was her own rabbi, Rabbi Emeritus Aryeh Azriel of Temple Israel. He spent time with Martin, helping her plan classes and activities to attend while in Israel.

“There’s a saying among visitors, ‘You go to Israel the first time to see where you want to come back to.’  In my case, that’s exactly what happened. I needed more time in Tsfat.”

Soon after her initial return, Martin applied for an Albert and Eleanor Feldman Family Israel Foundation grant through the Jewish Federation of Omaha. The foundation’s purpose is to implement and enhance the relationship of Jews in Omaha with Israel. She readied herself to spend nearly a month solo in Israel.

Prior to her 2019 trip, Martin learned of Yedidah Cohen, an experienced practitioner and guide of the Kabbalah practice who lives in Israel. Cohen offers courses online leading students through the text, creating a safe place to explore and learn in a small community. Those like Martin, who make the journey to Tsfat, are able to explore the texts with Cohen in person.

“One day I finally asked Yedidah, ‘Why do we struggle with good and evil? Why do good people still fight this battle?’ and she told me that the ego shouts, but the soul whispers.”

Laurie Rappeport, owner of Myrtle the Turtle Guest House in Tsfat, has seen visitors of every kind since purchasing the space in 1987. Out of all of these stories, she remembers Martin’s courage and kindness during her stay in the cottage.

“Sandi was really open to the whole experience, welcoming even the unpleasant aspects of travel with grace and warmth,” Rappeport said. “She didn’t speak the language, but was very patient. She didn’t let the language barrier stop her from immersing herself in the experience.”

~The Reverence of Effort~

Martin casually recalled the physical effort of the trip, which she references as a metaphor to the religion.

“It’s no coincidence that the destination was difficult to access,” Martin said. “There was, of course, the plane, the train, and walking, but a surprising amount of climbing. I had to be as strong of body to finish this experience as I was strong of spirit to start it. But by the time I got home and should have been exhausted, I found myself ready to endure the rest of the journey. I’m ready to keep listening, to keep learning without judgement.”

Martin stated that while she hasn’t ruled out another trek to Israel, the lesson she brought back was that it wasn’t where she was going that made the trip revelatory. It was the act of making a decision to ask a question, to move toward truths, and to embrace the journey.

Realizing that there will always be more to learn doesn’t present as an insurmountable task to Martin. Rather, it shows that this is a story that doesn’t end, and whose next chapters she has yet to write. 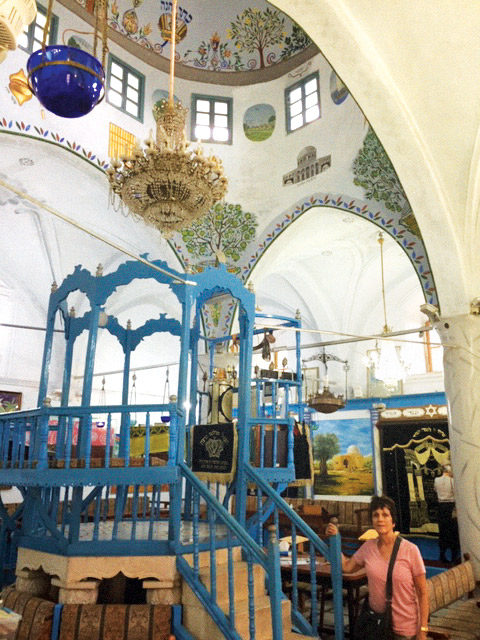