The Harry A. Koch Trap and Skeet Range in Omaha is open every day but Monday. The field house has a great wall of windows that looks out on to the shooting ranges and the muffled, deliberate sound of shotgun fire can be heard outside. The field house is spacious and peaceful, and sport shooters sit, drink coffee, watch people shoot, and talk about life.

One of those shooters is Pat Whitaker. Whitaker visits the range three or four times a week to help coach the Iowa Western Sport Shooting Team and to shoot on his own. At 78, he is handsome, bright-eyed, and humble. Sitting down for a cup of coffee with him, one might not suspect that he is revered in the Omaha sport shooting community; they might never guess he had at one time been a world champion in the sport, or that he once set sport-shooting records in military competition.

Whitaker hails from Midland, Texas, and learned how to shoot from his father, hunting dove and quail on those arid western plains. Then he joined the Army, where he served actively for 24 years. He completed three tours in Vietnam, and was an infantry officer. Eventually, he earned a spot in the Army’s competitive marksmanship unit. Insofar as his accomplishments as a marksman go, a highlight of his career was winning a world championship.

These days, the National Skeet Shooting Association conducts annual championships at their home grounds in San Antonio, Texas. Prior to the establishment of that facility, the championships rotated among a handful of facilities large enough to accommodate several hundred competitors. In 1972, Rochester, New York, was the selected site. One of the events was a 200-target event that embraced international rules, requiring a low gun starting position, variable delayed release of the target, and speedier targets overall. Whitaker won that championship. The month prior to that, he lost a shoot-off for second place in the Olympic selection shoot in Phoenix, Arizona (He was the alternate for the Munich Games), and two months before that, he won the Inter-Service Military Championships, setting a then national record in the process.

When asked about this list of honors, Whitaker, true to the fundamentals of his sport, keeps his eyes out front. “Whatever accomplishments I have I don’t really worry about now.  Those things are nice, but what I like now is to stay active and teach others the sport.”

So he does. He is a regular at the Koch Range on 68th and Harrison streets, showing up several days a week to guide young shooters who are learning the craft of shotgun sports—which, incidentally, is the second-fastest-growing collegiate sport, only bested in growth rate by competitive bass fishing.

Range supervisor Ryan Glow said Whitaker’s presence is an absolute gift to the facility, and to sport shooting. “He’s just a great ambassador to the sport,” Glow explained. “Pat helps out with everything that he can around here. He helps coach the college teams and the high school teams. He has even been coaching me for as long as I can remember, and I’ve been shooting competitively for 15 years.”

Glow said Whitaker stands out as a teacher for his experience and his ability to understand the individual needs of each student. “He’s been around the world, he’s seen everything. He’s shot a little bit of every discipline. He’s been there, and he knows what he’s talking about. He also knows how to connect with different kids. He knows how to get a thought across. It doesn’t work the same way with every kid, and he knows how to switch up his teaching tactics to help each student.”

Shooting skeet appears to be a simple activity that most people can imagine a basic version of. The shooter stands, gun cradled in the shoulder, eyes cast out into open air. When ready, the shooter calls pull, and from one of two towers (referred to as the high tower and the low tower, set across from each other exactly 120 feet, nine inches) the orange target leaps as quick as a thought. The moment is a blink, a breath, a reflex; the gunshot cracks and echoes; the target sails free, or, if hit, shatters (either in part, or completely). Then the moment is over. While the act appears straightforward, Whitaker said a great number of things need to converge in the hands, eyes, and mind of the shooter in order to make those few seconds a display of accuracy and grace. As an instructor, Whitaker is patient and focused, an expert at offering only the advice the shooter needs.  He has done this with countless sport shooters, including 20 years assisting the Creighton Prep trap team.

He especially loves the sense of teamwork he sees develop on a shotgun team. “Particularly on the high school teams, there is a wonderful sense of team play that many kids get to experience who might not be able to otherwise. We don’t cut. Everybody can shoot. There’s a great sense of teamwork.”

His most memorable student would probably be his own son, Nash (currently an emergency room physician in Indianapolis). “I taught him to shoot as my dad taught me, with the same shotgun, an Ansley Fox, side-by-side, 20-gauge,” Whitaker said. “We’ve shot a lot of father-son events. He’s a good shot. He’s salty, too.”

It is obvious when talking to Whitaker that he loves the sport deeply, and that he loves mentoring others in the art and science of shotgun marksmanship. He radiates kindness.

However, Whitaker is no ostrich as far as the current cultural issues surrounding guns go. He is very aware of how culturally charged the subject is. The career Army infantry officer and expert marksman explained his current feelings on the subject: “I do not belong to the NRA. I resent when any organization starts to direct me how to vote. I am against assault rifles. I don’t feel they have a role in our society. But I also fear losing our second amendment rights to overreach. I love to hunt, I love sport shooting.”

“Where’s the voice of reason?” he continued.

In 2018, Whitaker was inducted into the Nebraska Skeet Shooting Hall of Fame. Some might take that as a sign to rest on your accomplishments. Whitaker, true once again to the principles of his sport, has no such intention. At 78, he has his eyes out front, ready with a steady hand to teach the sport he loves when the chance comes. 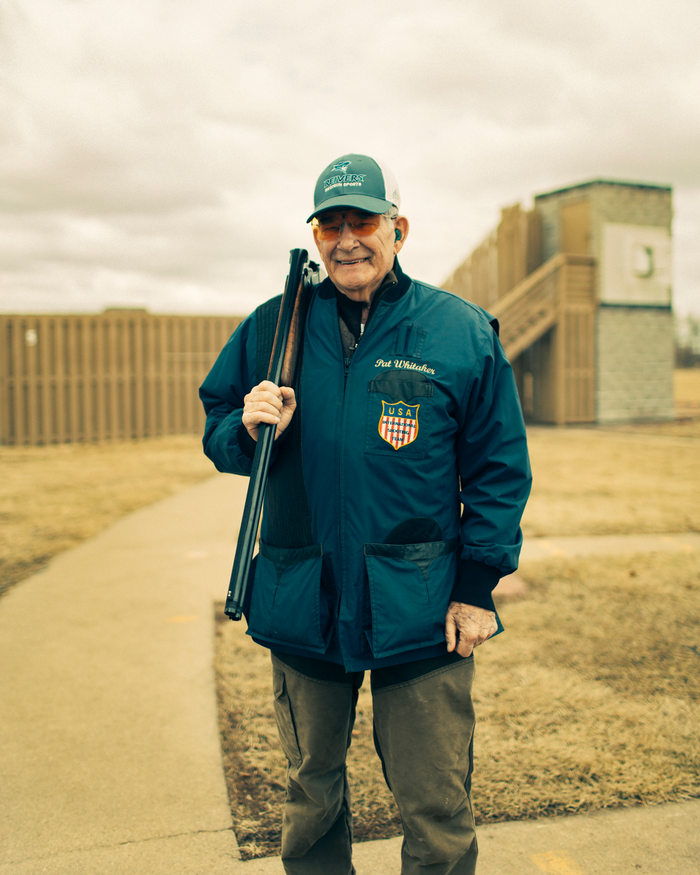