Jave Yoshimoto is a professor of art at the University of Nebraska at Omaha who creates by combining his personal thoughts and experiences with current events.

One of his favorite pieces was based on the time he spent as a volunteer in Greece during the European Refugee Crisis in 2016. He was moved to help after seeing an image on the internet of 3-year-old Alan Kurdi lying dead on the beach.

“I wanted to find out more and not rely on anybody else’s stories and just collect my own stories and see what happens,” Yoshimoto said.

He joined a Swedish nonprofit organization called Lighthouse Relief where he helped give refugees clothes, hot food, and places to stay.

"I met some amazing people, both refugees and volunteers, and came back a different person,” he said.

The aforementioned piece of art, “What is Your Emergency?,” reflects Yoshimoto’s unique creative process and style. It was made using a laser cutter to engrave a multi-layered design onto a piece of wood and then painting it. The foreground shows a woman fleeing a background of destruction. As a whole, the piece is in the shape of a cell phone and features “Ignore” and “Accept” buttons to ask the viewer how they would respond to the situation.

At UNO, Yoshimoto works alongside Elisa Wolcott, his studio assistant. Yoshimoto did not teach Wolcott while she was a student at UNO, but he often visited her while she worked in her studio and pushed her to become a better artist.

“Not only is he invested in his own practice, but he is invested in the lives and practices of his students,” Wolcott said. “There have been few people that have been as supportive and inquisitive about me as a human and my work.”

Yoshimoto’s current position at UNO is ideal for someone interested in mentoring young artists while creating their own work, but it has been a long journey to this moment. Working at a university is poetic for a man who was once a high school dropout, homeless, and toiling away in dead-end jobs that left him unfulfilled. He decided to direct his efforts towards college with the belief that he could do something more with his life.

“College was like this symbol of hope,” Yoshimoto said. “It became very important to me because it was my way of trying to push past being just a working-class person.”

Yoshimoto joked that he went to community college “for about seven years” before he began taking college seriously. He then spent almost a decade at universities from coast to coast and earned three degrees: a Bachelor of Arts in studio art at UC Santa Barbara in 2004, a Master of Arts in art therapy at the School of the Art Institute in Chicago in 2007 and a Master of Fine Arts in painting at Syracuse University in 2012.

Throughout this period of time, Yoshimoto refined his skills and laid the groundwork to becoming who he is today.

The first time current events inspired his art was in 2011, when one of the most powerful earthquakes ever recorded occurred off the eastern coast of Japan. The earthquake and the ensuing tsunami caused extensive damage throughout the country. Yoshimoto, who lived in Japan until he was 10 years old, created a 30-foot painting called “Baptism in a Concrete Estuary” that told the story of the natural disaster from the destruction to the recovery efforts.

One of the primary motivations behind his work is the simple desire to connect with people.

“What I’ve found so far is that everybody wants to be heard and accepted for who they are,” Yoshimoto said.

He studied art therapy in order to be a better support system for those around him. Art therapy is the process of working through difficult experiences by creating art. For two years, Yoshimoto was an art therapist at Asian Human Services in Chicago, where he worked with Asian immigrants and refugees in individual and group therapy sessions.

“I want to use art therapy to really get to know the core of a person and give them a safe space to express themselves,” Yoshimoto said.

His interest in mentoring younger artists can be traced to the time he worked with Seattle Public Schools in 2012. He said he enjoys being around youthful energy because it keeps him motivated and interested in the world and in making art.

“He is continually looking for ways to be more self aware, to be invested in those around him, and ultimately develop, as well as constantly evaluate the integrity and honesty of his own work,” Wolcott said.

Yoshimoto describes his life’s journey as “more than I ever envisioned for myself” and at the end of the day, his art is all about communicating and connecting.

“I just want to hopefully be the bridge of people’s hearts coming together,” he said. 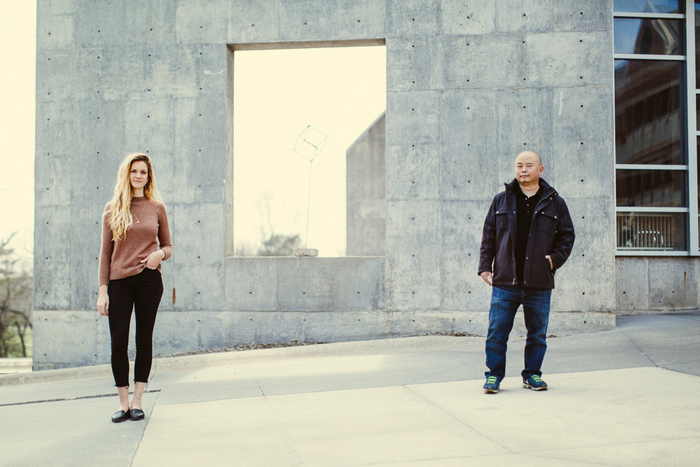