The Flower Lady of Leavenworth If you live in or frequent the Elmwood Park area, chances are you’ve seen her. A petite, mysterious figure frequently and fastidiously tending her impressive garden at 57th and Leavenworth streets—her face obscured by a wide-brimmed, straw hat reinforced with duct tape, her skin fully cloaked to protect from the sun. Within her well-tended landscape, sturdy sunflowers jockey for vertical position alongside fragrant, alabaster tuberose, while bright daylilies and zinnias stretch from the devil’s strip like nimble yogis to meet the street and the sidewalk.

“Many people don’t know me or my name, but they know that I grow flowers and I wear this duct tape hat,” says Maureen Borden, whose bountiful, 35-year gardening streak began with a single packet of zinnia seeds from Earl May.

A low-key local celebrity of sorts, many of her admirers know her as some variation of “The Lady of Leavenworth” or “The Flower Lady,” but Borden’s much more than just your garden-variety gardener. Though the zinnias will be late to the curbside this year, due to a sidelining springtime shoulder injury, Borden’s literary career is coming up roses since she published her first novel, Hear I Go, in fall 2016 at age 72.

Her debut work tells the story of “Malka,” who’s grieving the loss of her partner alongside the painful fact that she wasn’t by his side in his final moments. As a means to heal, Malka volunteers at a hospice facility, hoping to assuage her guilt and offer a “good death” to her charges.

“Malka wasn’t there when her beloved died and she’s determined to give someone a proper send-off, so she answers an ad to read to the dying, because hearing is the last sense to go before death,” Borden says.

Malka’s journey features Heddy, a dynamic hospice nurse, her zany neighbor, Lily, and Tomas, a kindhearted pawnshop proprietor. Hear I Go also introduces several colorful patients and their families, and Borden’s at her best when drawing these rich, compelling characters. Scott Morrill, who designed the book cover, added the description “A Tale of Life, Death, Bar-B-Que & The Tango,” succinctly expressing the blend of bittersweet and whimsy within.

Hear I Go is heavily inspired by Borden’s own experience of losing her “beloved” Micky Metz.

“We were together five years, from 1983 to 1988, when he had the audacity to drop dead of a heart attack,” Borden says with witty panache. “The book is mainly fiction, but there’s a considerable amount of truth in terms of myself and the character of my beloved. To get past my grief, I started writing about Micky about a year after he died.”

Like Malka, Borden wasn’t there at the moment Micky passed, after 12 days in the hospital.

“He died, I wasn’t there, and dammit, I had to be there for someone, so that was the impetus for the book,” she says. “I’m very much a believer in the afterlife, but Malka is still coming to terms with the question of ‘Is there really something beyond?’ She desperately wants to believe there is, and she comes closer, but there’s still some doubt.”

Borden has a degree in theater and a teaching certificate from UNO, though she spent much of her career in copy-editing and secretarial roles. Despite her varied career and love of gardening, Borden’s lifelong passion is writing. She’s penned a bevy of poems, short stories, even three screenplays, and says she lives for plucky, impactful passages.

“I think even a single, perfect flower is just as wonderful as a bouquet. Sometimes I’ll just put one flower in a vase and when I walk past and it catches my eye for a moment, it’s sort of like breathing properly,” she says. “It’s the exact same feeling when I read or write a really good line. It’s like an arrow to your intellect, and it makes you come alive.”

Borden says that while it’s a great joy to know one’s purpose early in life, it’s never too late to realize your passion and pursue that which satisfies your soul.

“I think doing right work is the most important thing in life—probably even more important than having a great love. Loves can end. People die. But if you have something that’s just so deliciously your own, then that’s a great gift,” she says. “I’m a geezer chick at 73, so I say to all the sassy seniors out there: Live your dreams. Go for it.”

And Borden’s still going for it. In fact, she’s currently conceiving her next book, Slipped a Micky.

“Hear I Go was an introduction to Micky’s rascality, which I hope to explore more in the next book,” she says. “Everyone should be lucky enough to have a Micky in their life. He was quite a rascal, and I’m the keeper of his many stories.”

Borden does a lot of thinking in the garden. She says the time spent outside “weeding and pulling hoses around like a retired fireman singing ‘Born Free’ to keep my blood pressure down” can also be fertile ground for contemplating characters and dialogue.

“Gardeners have long lives, purportedly because they stick around to see what will happen the next year, if there are successes,” Borden says. “So, I hope readers have long lives waiting for books to come out.”

This article appears in the September/October 2017 edition of Omaha Magazine. 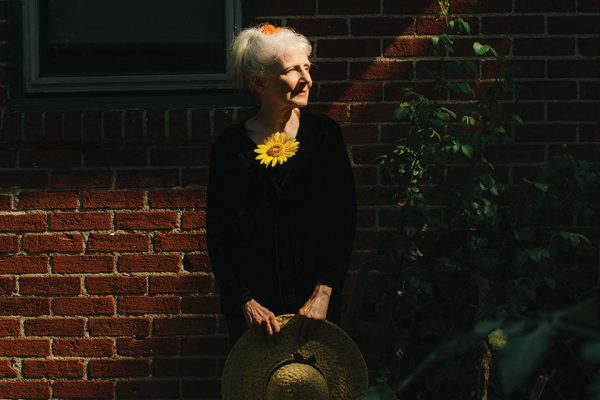